Unlike a normal 1000-watt solar generator, Grid-Tie solar systems (also known as on-grid, utility-interactive, grid intertie, or grid back feeding) are a type of solar system that is connected to the utility or local power grid. While you’ll need a mobile 1000-watt solar panel for your RV, a Grid-Tie system can be perfect for a residential property.

A grid-tied solar system is simply one that is connected to the electrical power grid. This grid is used by the system to generate usable solar energy and to channel excess energy for net metering, clean energy credits, or later use.

With a 1000w grid-tie solar system, your solar energy system will supply the majority of your electricity needs. Electricity from the grid will be used automatically and seamlessly when your solar panels are unable to meet your needs such as at night or during periods of heavy overcast weather. Grid-tied solar systems eliminate the need for a battery backup entirely, whereas off-grid solar systems still need one.

In most cases, a grid-tied solar PV system is the simplest and least expensive way to use clean solar power for your home appliances or office equipment. This is true in general for two reasons:

Grid-tie systems have only two major components: solar panels and a dedicated grid-tied inverter. All electric power generated by the solar panels is fed directly into your distribution board and offsets the electricity you would normally pay to use.

In order for this to work, the sun must be shining! If the panels generate more power than what is being consumed at the time, the balance will be fed back into the network, effectively reversing the electricity meter.

However, not all types of meters can do this. Because no batteries are used, there is no way to store independent energy for later use. This means that energy will still be obtained from the network at night or at other times your panels are not producing enough power.

What is the function of a grid-tie inverter?

Solar panels produce direct current, also known as DC. Direct current is not suitable for home use because it is prone to power outages and has high maintenance costs. Moreover, conversion is necessary because modern appliances are all powered by alternating current (AC) only.

However, panels cannot convert DC to AC on their own. This is where a high-power inverter comes into play.  Older solar systems used a single central inverter before being upgraded to the more efficient and smart microinverter.

A string-inverter can achieve higher power which converts direct current from several panels connected in a single array, and a large installation may have several of these.

Shade losses are a significant issue with central and, to a lesser extent, string inverters. The output of the rest of the system is severely reduced when one or more panels are shaded.

How does grid-tied solar work?

In order to understand how grid-tie works, it’s important to understand that it is dependent on a functioning electrical grid. Therefore for the system to function properly, the grid must also be operational.

Solar panels, which are usually installed on a rooftop or in an open area, use the photovoltaic process to convert the sun’s rays into direct current electricity. A pure sine wave inverter is required for the conversion of generated electricity into AC in a grid-connected system.

The inverter is an important component of the system because it directly converts direct current (DC), also known as the DC input, from the panels into AC output matching the power grid’s frequency, which is usually 60Hz in North America.

The direct current electricity generated by the solar panels is fed into the pure sine wave inverter, which in turn is connected to the distribution board and feeds the electricity into your house for use. There should be multiple protections in the system, such as a circuit breaker, to ensure overload protection and that the system operates safely.

This is in contrast to an off-grid system, in which DC electricity is directly stored in batteries before being fed to the inverter. In this case, the electricity is fed directly into the grid.

The following are the primary advantages of grid-connected solar PV systems: 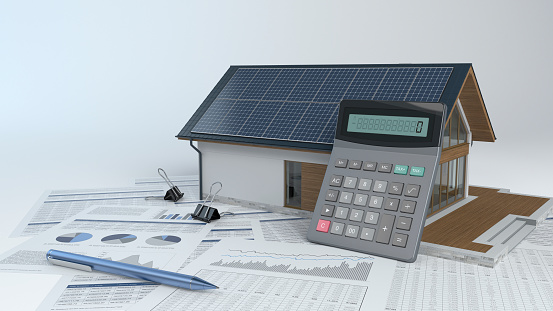 When it comes to choosing a solar power system, one of the first and most critical decisions to be made is whether or not the system will be grid-tied or off-grid.

A grid-tied system, the simplest of the options, is the most popular for a reason. Grid-connected systems have the lowest upfront costs and are the simplest to integrate into your current lifestyle (electricity pun definitely intended!).

When the panels cannot cover the energy load on their own, such as at night or on cloudy days, your local utility provides power so there is no need to add batteries or a backup generator.

Grid-connected systems can also be more flexible. Homeowners can install as many, or as few, panels as they want without worrying about meeting the entire home’s energy demand.

Another reason grid-connected systems are flexible is that they also allow for the addition of extra panels in the future, such as if you plan to purchase a new electric vehicle and want to charge it using solar power, without having to buy more equipment such as batteries.

When your panels produce more energy than your home requires, which is common in the afternoon sun, the excess energy can be sent back to the grid in exchange for electricity credits. These credits can then be used when the panels are not producing power. This is known as net-metering, and it is a critical factor in the return on investment of grid-connected systems. Net-metering structures differ by utility and state, so it is critical to research your local power company’s net-metering policy. In general, the power your grid-connected system sends back to the grid results in reducing electricity bills.

The cost-effectiveness of grid-connected solar systems is dependent on their proximity to the power grid. Because extending transmission lines can be costly, grid-tie systems may not be the best choice for more remote properties.

Another consideration for this type of solar panel is, that even if the sun is shining, it will not provide power during an outage unless additional equipment, such as an energy storage device, is installed. This is done to protect utility workers who require the lines to be down in order to safely complete their repairs. Shutting down grid-connected solar power systems during outages ensures that no solar electricity is accidentally sent back through lines while they are being repaired.

This type of solar panel system is a good place to start if you want to be completely independent of your power company, or if you have a home or business in a remote location. Because you will need to include a battery storage system or a backup generator, or both, these systems are more complex and expensive than their grid-connected counterparts.

Because there is no grid connection to provide power when the sun isn’t shining, a battery pack is required. A solar battery bank stores excess energy during the day and provides power when it is needed, such as at night or during other high-demand periods.

Off-grid solar installations can be more expensive than grid-tie because additional equipment is required to successfully power your home 24 hours a day, seven days a week. However, if your home is sufficiently distant from the power grid, the investment in solar battery storage may be less expensive than the cost of extending electric lines, especially if crossing difficult terrain is required. There are also specific situations, such as outlying buildings on a large property, where off-grid solar is best suited while the main compound remains grid-tied.

Even if you live close to the grid, some environmentally conscious clients prefer to generate all of their own power. Installing an off-grid solar power system also means you will never receive another electricity bill!

Off-grid customers are also free of the local power company’s environmental footprint and the energy inefficiencies associated with distribution. Not having to worry about rising electric rates or changing utility policies, particularly potentially volatile net-metering changes, has a lot of appeal to some people.

Off-grid systems are best suited to homes with low-energy demand, such as net-zero homes or those willing to invest in energy efficiency retrofits.

Even when properly sized, off-grid solar customers should be prepared for occasional power failure. Unexpected circumstances can always deplete battery backups, and you must then wait for the sun to return to recharge. Because of this, a backup generator is a popular addition to off-grid systems.

Off-grid options should also be considered if your home or business is more than 100 yards from the power grid and not yet connected.

Because a grid-tied system does not require batteries or other equipment to store energy, it reduces equipment and installation costs, meaning grid-tie solar systems are generally less expensive and easier to install.

Solar panels frequently generate more electricity and voltage input than you can consume, and because of net metering, excess electricity is fed back into the utility grid. Net metering plays a critical role in incentivizing solar power and many utility companies will buy electricity from homeowners at the same rate at which they sell it.

Access to backup power from the utility grid is one of the additional benefits of being grid-connected. At the same time, you contribute to the reduction of the utility company’s peak load. As a result, the overall efficiency of our electrical system improves.